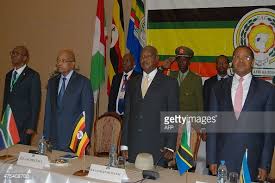 IB Times UK
After stalling on negotiations for months, peace talks on the Burundi crisis are expected to resume on Tuesday 12 July in Arusha, Tanzania.

In April, the UK government called on the Burundian government to protect prisoners’ human rights and stop abuses, after raising concerns about the treatment of prisoners in the African nation that has been rocked by deadly political violence for over a year.
Hopes of any progress were quashed in May when the government of Bujumbura refused to hold talks with key members of the umbrella National Council for the Restoration of Arusha Agreement and Rule of Law (CNARED) and a major civil society movement known as Halte au 3e mandat.

Both were opposed President Pierre Nkurunziza’s bid for a third-term in office. At the time, the regime agreed to attend peace talks in Arusha in which only government officials, two former heads of state and a selection of like-minded individuals participated in an exchange with mediators.

As delegations have either arrived in or are on their way to Tanzania ahead of the talks held at the International Conference Centre (AICC), IBTimes UK looks at what can be expected from the negotiations, hosted by former Tanzania President Benjamin Mkapa. Mkapa was appointed as the facilitator for the Inter-Burundi Dialogue by the East African Community (EAC) on 2 March.

Is the government attending?
According to a document seen by IBTimes UK, seven government officials − including Foreign Minister Alain and spokesman Willy Nyamitwe, Interior Minister Pascal Barandagiye and Minister for EAC Affairs, Leontine Nzeyimana − will be attending the talks.

At least eight ruling CNDD-FDD officials will also be present in Arusha.

While former presidents Pierre Buyoya and Sylvestre Ntibantunganya are expected to attend, presidency spokesman Nyamitwe on Monday confirmed former President Domitien Ndayizeye was aboard a flight heading to the talks.
Will the opposition participate?
A number of opposition parties (Uprona, Radebu, Frodebu and Pader) will be represented and leaders were invited by the mediators, including Agathon Rwasa, leader of opposition, National Liberation Forces (FNL) and current deputy head of parliament. However, officials from the MSD party have not been invited.

Following the fiasco of the previous round of negotiations, however, Jeremie Minani, a spokesman for the alliance-in-exile Cnared exclusively told IBTimes UK that progress has been made. IBTimes UK understands that, while the negotiators refused to invite the Cnared as an entity − as previously required by the alliance − to avoid government officials pulling out of the talks, it had instead agreed to extend the invitation to between 15 and 20 members of the Cnared.

The regime describes Cnared as is a “terrorist organisation”.

“There will be a strong delegation from the Cnared in Arusha, whose goal is to tell the mediator what we already told him in Brussels − that we want to negotiate a return to peace,” Minani confirmed. “The entire world needs to understand that we are not in a spirit of sabotage of the negotiations because, despite the mediators’ refusal to take into account our prime demand to be invited as an entity, we still agreed that a Cnared delegation attended without the Cnared label. That is essential.”

Will Burundi’s civil society be represented?
For many Burundians, the participation of a number of members of the Cnared, as well as those of the civil society who were against the third presidential term, including right defender Pierre-Claver Mbonimpa, is a step forward.

It is still unclear whether the presidents of other civil society organisations including Vital Nshimirimana (FORSC), Pacifique Nininahazwe of FOCODE and ACAT will be represented. IBTimes UK understands that Nininahazwe was invited, however.

“We must admit that there has been a spectacular evolution but the regime of Bujumbura remains stubborn and not everyone has been invited to participate,” Minani said.
Are Burundians confident?
The presence of both sides seems to indicate they are willing to compromise a little.

“I think Mkapa and other Burundi partners have done a great job in trying to deal with both the government and the opposition’s picky requirements. Despite the peace talks being postponed (until 11 July), there have been satisfying changes,” Jean Claude Nkundwa, a Burundian peace activist, told IBTimes UK.

According to the peace worker, the fact the government has not changed its commitment to join the talks is encouraging, as it may allow Mkapa to draw up compromise proposals and keep the focus on Burundi. For instance, French ambassador to Tanzania and the EAC, Malika Berak, last week pledged her country’s willingness to provide support to the peace talks.

“With this inclusion, we expect the mediators to have a clearer picture and deeper understating of Burundi’s current crisis… These level talks will also help international community be well-informed about the nature of the Burundi crisis and Mkapa’s report will help international actors decide how to prevent mass atrocities in Burundi and protect civilians from the ongoing killings.”

According to Nkundwa, between 40 and 70 people die every month.

What will be discussed?
According to the invitation sent to members of the Cnared and Bujumbura officials, the facilitators are expected to listen to the different parties involved about a number of topics. On top of the list will be what the negotiations agenda will include, as well as what the negotiations’ priorities should be.

The opposition is expected to outline “urgent preconditions” that it wants the negotiators to cover − the cessation of violence, the reopening of independent media and liberation of political prisoners.

“We will reiterate our position, and hand our immediate road-map to the facilitators. The rest of our demands include freeing up the political space and having a democratic transition that will drive the organisation of free and fair elections for the restoration of constitutional order,” Minani said over the telephone.

The spokesman, meanwhile, insisted the alliance “would not abandoned its principal preoccupation to be considered as an entity” and said it was wary of “being pushed towards a wall or the exit door, or starting the negotiations already weakened by the conditions of the mediators that seem to go in favour of the Bujumbura regime”.