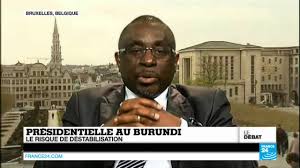 Sanctions should be imposed on Burundi’s government following a decision to remove the country from the International Criminal Court, according to an opposition group. The decision will make it difficult for the ICC to proceed with a preliminary investigation into alleged crimes committed since April 2015, says an international criminal justice expert.

“We’re very sad to see [President Pierre] Nkurunziza pulling Burundi out of the ICC,” said Pancrace Cimpaye of the National Council for the Restoration of Arusha Agreement and Rule of Law (CNARED). “We’ve got a special report from the UN which highlights the risk of genocide in our country.”

Nkurunziza signed a presidential decree on Wednesday pulling Burundi out of the Rome Statute that established the ICC. The decree followed a vote by Burundian lawmakers who overwhelmingly voted in favour of withdrawing from the war crimes court.

Cimpaye believes that pulling the funding for Burundian soldiers who are serving in UN peacekeeping missions will result in the troops returning home and “protecting the peace”. Furthermore, Cimpaye wants to see travel bans and asset freezes applied to high-ranking Burundian officials.

CNARED members based in Europe plan to protest the decision to pull out of the ICC outside the court’s headquarters in The Hague on 28 October, according to Cimpaye.

“The key thing to officially pull out of the International Criminal Court is to deposit a notice of withdrawal at the United Nations,” said Mark Kersten, an expert on international criminal justice, Munk School of Global Affairs. “Then it takes one year for that withdrawal to come into effect.”

However, Burundi’s withdrawal from the court could be complicated by the preliminary investigation that the ICC launched in April 2015. The probe focused on allegations of “acts of killing, imprisonment, torture, rape and other forms of sexual violence, as well as cases of enforced disappearances” linked to the unrest caused by Nkurunziza’s bid for a controversial third term in office.

“It’s not entirely clear what this withdrawal would mean for a preliminary examination,” said Kersten, who founded the Justice in Conflict blog. “If it doesn’t open that investigation within a year, the jurisdiction over those crimes would expire.”

“It’s a little difficult for the International Criminal Court, it’s been put in a difficult position as a result of this potential withdrawal,” Kersten added. “If it does open this investigation it will look and be framed by certain elements as being as vindictive and trying to punish Burundi for withdrawing.”

On the other hand, if the ICC does not investigate Burundi, critics of the court will seize the opportunity to call it “toothless”, highlighting the fact that Nkurunziza called the ICC’s bluff, according to Kersten.

Some African leaders have said that the war crimes court is unfairly targeting Africans for prosecution, calling for the continent to pull out of the Rome Statute.