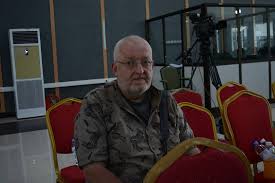 Just returned from Burundi and I have to admit that this was a rather hot trip:

I traveled to Burundi with a regular passport and a CPGL – paper (I’m a resident in the African Great Lakes Region and whit this paper we can travel without any restrictions to the RDC, Rwanda and Burundi) and I was able to enter Burundi without any problem.

As usual I applied for an accreditation at the CNC, the so called Conseil National de Communication. I went there on Monday and talked to the second in charge in that office, Mister Daniel. He told me that his boss was out but that I would receive my accreditation on Wednesday. I told him that I just came to Burundi to talk to officials and that I was preparing a general report on the situation in the country for television. I also told him that I would be giving a camera class to the cameramen of the Iwacu group who is still working in the country. I’m teaching them to shoot video for free. Gabriel told me that in order to teach in Burundi to a Burundian news group I would have to pay double for my accreditation. The price for press papers in Burundi is 300 US $. I told him that I would drop the idea to pay double and that I would just concentrate on my background report for television. He told me again that I would get my accreditation on Wednesday.

…”Every single visit must be reported to the “chef du quartier”…

On Monday and Tuesday I mainly talked to diplomats and a couple of long time friends but I did not film and I avoided to meet other contacts because it had become clear to me that I was being followed constantly wherever I wanted to go. Please also note that there are new laws in the country that say that whoever receives You in his home has to report this visit to the ‘chef de secteur’ and that this chef de secteur is in contact with the ‘Documentation’, the intelligence service of the president.

On Wednesday I dropped all my paperwork in the CNC and I was called to come back in the afternoon to pick up my accreditation. I also went to the bank to pay 300 US $ on the account of the CNC. When I went back I was called in Gabriel’s office. He told me that my accreditation would be refused ‘because I had entered the country illegally as a journalist and I should have applied for a regular visa in Belgium (I’m Belgian). I explained him that a CPGL is a legal document and that my residence was in Rwanda. He also told me bluntly in my face that as long that I would stay in Burundi my safety could not be guaranteed. I asked him if he was threatening me but he avoided to answer that question. I repeated to him that my papers were in order. He stepped outside the office and I overheard him making a long distance call to a person named ‘Willy’. When he came back to me he was even more distressed and he told me again that I would have to leave the country and that I would not get the permission to work in Burundi as a journalist. He added to that that I was known by the Burundian services as a journalist who had covered the events in Burundi last year and that now everything had changed.

The previous evening I received a visit in the hotel of two Burundian journalists: one of them was a long time friend and the other one was working for the pro government radio ‘Rema’. They were repeating all the time that the situation in Burundi had calmed down a lot and they were both boosting that they were in direct contact with Willy Nyamitwe, a very important adviser of the president. They were collaborating with him to set up biog music events in the capitol for the local youth. I sensed that they were testing me out about my plans in Burundi and I did not tell them anything.

After I left Gabriel’s office I was followed again by a couple of men in a white Hilux van (these cars are standard Documentation cars). In the afternoon one of the two journalists I had met the day before told me that I would not be touched unless I worked as a journalist. I re-booked my flight to Kigali and I just arrived home. I thought You should know all this: Burundi is turning into a second North-Korea where nobody is safe.

According to diplomats and people I communicate with on what’s app about 150 youngsters are being arrested every day. Most of them simply disappear. When I was going to have some lunch in the Alexander gallery I witnessed the arrest of a whole group of youngsters who were pushed into a mini van. My only goal to go to Burundi was to give the Burundian government the chance to explain to give its point of view on the current situation but they denied me access to them (in rather rude way !). Every day more and more people are trying to flee the country but they are being stopped at the borders by the Imbonerakure, the pro government militia. . The whole population is living under stress. They are scaring us off to return to Burundi and I might have been lucky that I am a muzungu (white guy). But this will not refrain us from covering this conflict that might turn into a real disaster very soon.

Nobody is reporting about this: last week my colleague Julia Steers was also arrested in the country. Last month they killed a colleague of the newspaper Iwacu. There is nearly no free press left in the country and all our colleagues have fled or went underground. We should act to counter all this. If they will deny access to the press we’ll start organizing trips into the same country without visa’s. I will write an article about this tomorrow and post it on the social media. They refused to give me back my 300 US $ dollars so they still owe that to me