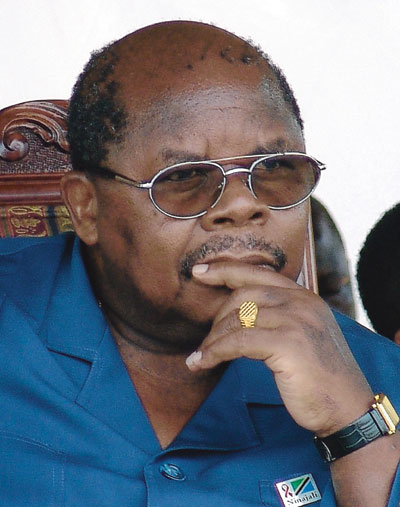 H.E.  Dr. John Pombe Joseph Magufuli, Chairperson of the EAC Summit and President of the United Republic of Tanzania,

H.E. Yoweri Kaguta Museveni, President of the Republic of Uganda, and Mediator of the Inter – Burundi Dialogue,

H.E. Paul Kagame, President of the Republic of Rwanda,

H.E. Uhuru Kenyatta, President of the Republic of Kenya,

H.E. Pierre Nkurunziza, President of the Republic of Burundi,

Let me begin by thanking you for the confidence that you bestowed on me and appointed me to attempt to facilitate the Inter – Burundi Dialogue. You may be surprised why I have used the term “attempt”, it is because of what I have gathered as to be the root cause of the crisis and the difficulties that I have encountered. These compel me to reach the conclusion that, though this crisis is not insurmountable, it is complicated and requires your concerted efforts to reach a permanent solution acceptable to all parties.

In my report to you today, I intend to appraise you on the progress so far attained.  Having been out of active politics for more than ten years, I had to travel around the region and consult Your Excellencies to get your impressions on the nature and possible causes of the crisis you have asked me to help resolve. Then I travelled to Addis Ababa and met Her Excellency Nkosazana Dlamini – Zuma, Chairperson of the African Union for the same purpose. Thereafter, I extensively undertook consultations with various international stakeholders also to get their impressions on the crisis, report of any earlier efforts they undertook with similar objectives and to seek their support as well. In this regard, I met Ambassador Jamaal Benomar, Under-Secretary General and Special Advisor to the United Nations Secretary General on Great Lakes Region; various Ambassadors and High Commissioners, Special Envoys of various countries as well as Prof. Ibrahima Fall, AU’s Special Representative for the Great Lakes Region and Head of the AU Liaison Office in Burundi. These consultations gave me an in-depth understanding of both the nature and scope of this crisis.

After these consultations, I felt informed enough to call the protagonists to listen to their points of view. So, I thence convened the first session of the dialogue on 21 – 24 May 2016, in Arusha, Tanzania. The invitees in this session were the Government of the Republic of Burundi, the ruling CNDD – FDD Party, both camps of the opposition parties e.g. those who participated in the 2015 elections and those who did not, civil society organizations, the National Commission for Internal Dialogue (CNDI), religious groups, Women and Youth groups. Owing to the difficulties of inviting the external opposition in the same session emanating from their conditions that they be invited as a coalition of political parties (CNARED), an organization which is not recognized by the Government of the Republic of Burundi, I had to travel to Brussels to meet them. I thought it was important to meet them because the group constitutes very important personalities who have held high positions in Burundi. So, their perspective would be very informing to my facilitation. I travelled to Brussels early in June and met them. In my meetings in Brussels, I met all the three former Presidents, four former Vice – Presidents, the former President of Parliament, the former Spokesperson to the President, the former Vice – President of the Constitutional Court, the Ombudsman of the Republic of Burundi and others.

In all these consultations, a lot of issues were raised. I can see some convergence on few issues like security, albeit with varying degrees. On the other hand, there is also a considerable divergence on many issues. It is my intention, therefore, to appraise you of the issues that I have been able to gather and that I think will form the thrust of the Mediation that H.E. President Museveni will preside. These are the issues that I brought forward in the second session that I convened in Arusha on 12th to 15th July 2016 which I asked the parties to validate, prioritize and thence set the agenda for the Mediation.

In no particular order of importance, the contentious issues are as follows:

In addition to these findings, I also asked the protagonists to reflect on two important points: First, to avoid the tendency of denial. I asserted that, Burundi belongs to all Barundi, it is not owned by any one person, one ethnic group, one party or one civil society institution. There must be a realization that there is a government and there is an opposition.

Second, the Arusha Agreement and the Constitution there from, are the property of all Barundi.  It is not the entitlement of any one person, one party or one civil society institution.

As a Facilitator, I have formed the following impressions:

Despite the impressions that I have made out of these consultations, there are recent developments between the last session and now that I feel do not augur well with the objective of this mediation process.

PROPOSALS ON THE WAY FORWARD

After forming these impressions, I want to make the following proposals to the Summit on the way forward:

I thank you for your kind attention.