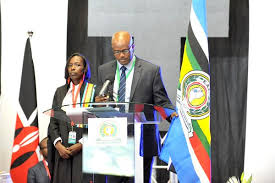 According to an article posted August 26th 2016 on the Facebook account of “Ikiriho” (a presidential website), the medium wants us to believe the existence of alleged powerful network of former EAC secretary Mr Richard SEZIBERA (Rwandan citizenship) within the East African Legislative Assembly (EALA) intending to propose “a vote of no confidence towards Libérat MFUMUKEKO”. Nevertheless he ignores that EALA is an independent institution, impossible to manipulate as the Burundian National Assembly is constantly manipulated. He should have responding to all his shenanigans and not shaping himself a scapegoat or blaming third party without evidence.

According to our source within the EAC secretariat’s office, MFUMUKEKO will have to foment everything in order to meet the satisfaction of his boss in Bujumbura. However he fears about his fate during the next Council of the EAC Foreign Ministers to be held next week before the Summit of the EAC of heads as he will have to respond to several allegations against him:

1. Only after 3 months in his office as Secretary General, 3 EALA committees have been instructed to investigate his reported power abuses. Probably he fears the investigation reports.

But instead of resign, MFUMUKEKO has been seeking to index the 3rd party as responsible for his abuses.

Another point, our source revealed that, both MFUMUKEKO and Minister Léontine NZEYIMANA have tried to dismiss a Burundian staff working at DPS just because he is Tutsi and the government of Burundi has been accusing him of being a member of MSD (an opposition political party) and therefore accusing him to deal with the opposition against the government.

He explains his attitude awkwardly that he is concerned about the donor’s lateness in releasing the funds. Subjective reasons why he decided to fire the staff and close the DPS! However the Bujumbura regime outstanding’s payments of EAC membership fees amounted to $ 13 million included last fiscal year 2015.

What about staff under Partnership Fund or other projects without funds? Why they weren’t chased out? All these explanations are wrong. He is absolutly serving Pierre NKURUNZIZA as his ambassador rather than being at EAC service.

In conclusion, the opinion has witnessed the partiality of MFUMUKEKO in the ongoing Burundi peace talks where he serves as the Representative of the Bujumbura regime, we urge him to introduce his resignation as EAC Secretary General.

We aware that the EAC is concerned about the precarious security situation in Burundi and we urge Burundian people who has sworn to defend the fundamental texts of our country (the constitution and the Arusha Agreement), to keep being mobilized as one man against NKURUNZIZA’s tyranny and his clique.