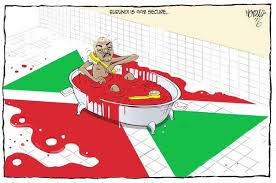 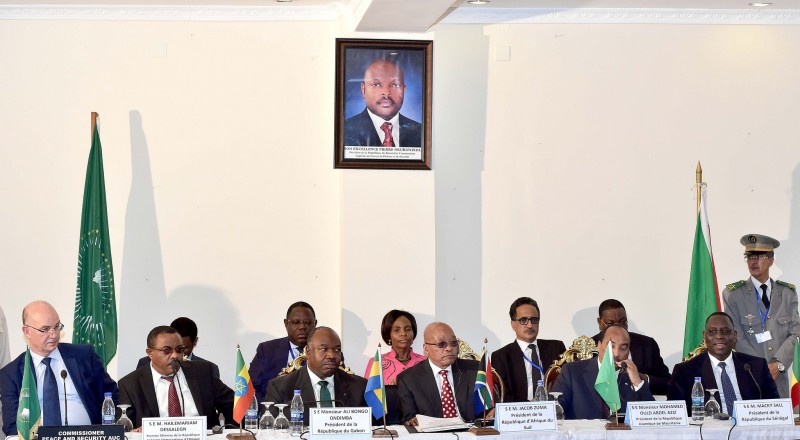 Burundi‘s year-long political crisis, sparked by the president’s controversial third term, has created a “climate of fear, distrust, and lawlessness”, in the words of Human Rights Watch. UN special rapporteur Christof Heyns described the violence moving from “overt” to “covert”, with arrests, disappearances, torture, and assassinations.

In the tense uncertainty, controlling the narrative is central to legitimacy. Government ministers challenge criticisms with counter-claims to discredit human rights investigators and opposition. People with views that differ from the official line are labeled ‘putschist-terrorists’ and protests are framed as ‘insurrection’, while international criticism is rejected as misinformed or imperialistic.

The space for a free, independent press has shrunk considerably. Burundi’s Reporters Without Borders 2016 Press Freedom ranking fell 11 places to 156 out of 180, which Alexandre Niyungeko, Burundian Journalists’ Union’s president, commented was stilllenient.

Five radio stations were forcibly closed in May 2015 during a failed coup in May 2015, which tried to take power away from President Pierre Nkurunziza, making access to independent coverage difficult, especially as many Burundians rely on radio. Independent broadcaster Isanganiro and pro-government Rema radio stations were recently permitted to reopen – after months of forced silence – although under a potentially restrictive ‘agreement’. Isanganiro shared this video showing damages to its offices from the attack, allegedly by police, that resulted in its temporary shutter.

The disagreement over Nkurunziza’s decision to run for a third term last year, which first manifested in protests and citizen campaigns, eventually morphed into clashes and armed rebellions. The government has responded with a heavy hand, pushing dissenters into exile or silence.

Ministers downplay violence and economic problems, saying the country is 99% secure, despite deaths and the ongoing refugee flight, leaving some districts almostempty. Assassinations such as those of Colonel Darius Ikurakure and GeneralAthanase Kararuza and arrests imply military divisions, and some note that politicians have heavy guards assigned to them, despite their claims of security. The International Monetary Fund estimated Burundi’s gross domestic product (GDP) shrank 7% in 2015, and food prices have multiplied.

Kenyan journalist Victor Ndula satirized this with a cartoon of Nkurunziza in a bath tub full of the country’s blood: 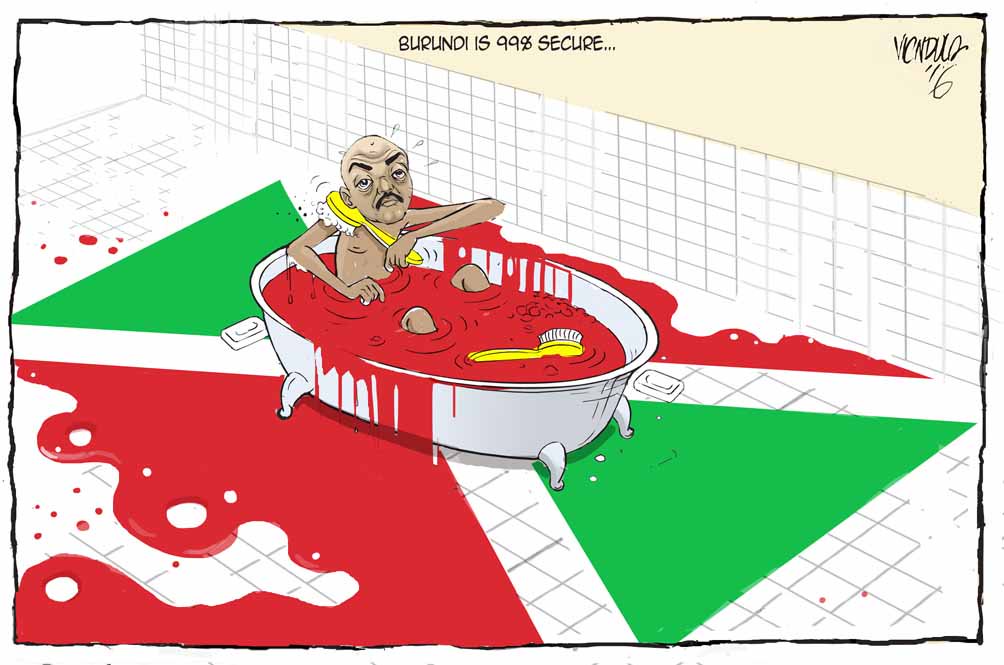 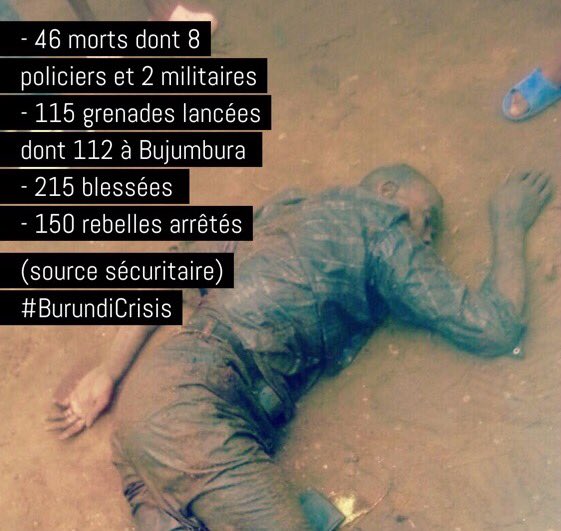 Despite harassment and shutdowns, though, reporters have presented large amounts of evidence of violence by security agents and the government’s Imbonerakure youth-wing, as well as by rebel and unidentified attackers. Reporters are continually working to uncover facts, and SOS Médias Burundi announced an online form to collect testimonies.

Men presented by police as surrendered rebels have admitted to wide-ranging crimes, from political killings and staging videos for foreign reporters, to murdering Catholic nuns and even burning down a supermarket. These “revelations” have been questioned though. Scrutinizing contradictions and missing evidence, leading independent newspaper Iwacu highlighted suspicions of staged confessions, to conveniently clear security services of various cases while blaming opposition.

Amid calls for inclusive, internationally mediated dialogue, the government heldsessions of an internal inter-Burundian dialogue, but with most opposition and many civilians in exile, remaining opposition parties called it a “masquerade”, seeing it as achieving little but echoing official rhetoric.

Security services are accused of responding to a December rebel attack by arbitrarily attacking ‘rebellious’ neighbourhoods, killing possibly over 100 people. Amnesty International’s report showed satellite images of suspected mass graves, matching eyewitnesses’ accounts. These were denied, and the government subsequently announced it found several mass graves perpetrated by rebels. Iwacu, however, wrotethat there were serious weaknesses in the testimony and evidence offered by the government.

A detainee presented by police also accused Human Rights Watch, which hascriticized several government official inquiries into extrajudicial killings for omitting security services abuses, and therefore entrenching impunity, of staging rape footage. The organisation denied the allegation, highlighting that they have not even specifically reported on the subject.

Reporting mistakes can definitely occur, such as French TV programme “le Grand Soir 3″ airing of false video footage of violence, which caused significant controversy. This does not by extension invalidate other evidence, though.

Independently reported testimonies implicated Rwanda in training insurgents, which it denies, an interference which could be seriously inflammatory. Government figures used these accusations to blame the crisis more generally on Rwanda, though, trying to rhetorically externalize the crisis’ underlying problems.

On 12 March police presented a detainee as a Rwandan military spy, although his ownfamily told reporter Esdras Ndikumana he was not a soldier. Rwanda’s President Kagame was even accused of attempting to “export genocide”, and other statementsimplicated Rwanda’s government in the 1994 plane crash which killed the Rwandan and Burundian presidents.

Government representatives have also referenced international ‘plots’, implicating actors from the Vatican to European Union. Burundi ambassador to the UN Albert Shingiro rejected the organisation’s reports on the crisis as “biased“, which in turn faced some scepticism:

@AShingiro @willynyamitwe @UNHumanRights prove it !!! Your illegal gvt has lost credibility …U will one day face the music too…

Diplomatic isolation continues with the International Organisation of La Francophonie, which represents the world’s French-speaking countries, suspendingcooperation, followed by the EU halting aid. International pressure has gone little beyond sanctions, although long-stalled talks are scheduled for 2 May, to be led by Tanzanian ex-President Benjamin Mkapa, and International Criminal Court prosecutor Fatou Bensouda announced a preliminary examination of the crisis.

@nyamitwe @jacobzuma how does a declaration from a member of delegation supercedes that of the organ that delegated him?@AU_PSD @DlaminiZuma

The struggle for narrative is central to the crisis. Government critics are rejected as plotting or linked to insurgency, who become ‘terrorists’; a tag used in many contexts to justify broader clampdowns on political dissent, violent and peaceful.

Similarly, government supporters and security services employees become collectively associated with authorities’ repressive tactics. Louise Riziki, a Yaga blogger, recounted, for example, how a policeman from Musaga, a ‘rebellious’ Bujumburan district, felt trapped between social ostracization and keeping his job to support his family. In this way, political affiliation is reduced to a binary, divisive, dangerous choice.

Security services’ repression and retaliatory rebel attacks point to each other as justification. While the narrative is fought for, though, people continue fearing deadly attacks and a suffocating recession.