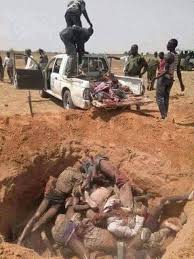 IBTimes UK speaks to Pierre-Claver Mbonimpa who alleged 14 mass graves have been identified.

A Burundian human rights organisation has claimed to have identified at least 14 mass graves throughout Burundi.

The bloody crisis that has killed up to 900 people in the country pits supporters of President Pierre Nkurunziza against those who say his re-election in July 2015 for a third term violated the constitution. After a failed coup in May, the government intensified its crackdown and most of those arrested or missing are young men and women accused of participating in or supporting opposition groups.

With the help of both security and local sources as well as witnesses, one of the main human rights groups in Burundi, the Association for the Protection of Human Rights and Detainees (APRODH), says it has identified the location of at least 14 mass graves.

In March, the authorities invited the press to witness the excavation of a mass grave containing some 30 bodies in the predominantly anti-government neighbourhood of Mutakura. At the time, the government claimed that people buried in Mutakura had been killed by the opposition.

The President of the APRODH, Pierre-Claver Mbonimpa, exclusively told IBTimes UK his organisation had identified four mass graves in Bujumbura Mairie, one in the province of Bujumbura, four in Bubanza, two in Muramvya, two in Ngozi and one in Gitega province.

Speaking from Belgium, Mbonimpa explained how his organisation was able to verify the location of the alleged mass graves. “For a long time, we have communicated with people within (state) institutions, even within the National Intelligence Service (SNR), in collaboration with our observers in the communes, in the provinces (who cannot be identified),” he explained.

“We have friends within the institutions, and there are military and policeman of good faith. There are people within the National Intelligence Service of good faith who don’t agree with what is happening in the country. At this moment, they tell us: ‘Who, because you have a voice, or because you can keep this data, we’ll give you the data”,” Mbonimpa said, adding: “If I speak up about these mass graves, (it’s because), for a long time, we knew exactly where these mass grave were located.”

According to the APRODH, a small number of victims has been identified. Mbonimpa said the organisation has able to verify claims that a number of military accused of participating in the 13 May 2015 coup, perceived members of the opposition as well as Imbonerakure, but the identities of most alleged victims are not yet known.

Indeed, the rights defender said, while the APRODH was able to identify the location of the alleged mass graves months ago, a lack of access of international rights organisations and members of the international community, such as United Nations (UN) and African Union observers, means that no investigation can be undertaken. “Even today the UN are not able (to do this), because the UN are, day after day, denigrated by Nkurunziza’s regime.”

These claims echo similar allegations made by US ambassador to the UN Samantha Power, who at the end of July, told the UN Security Council about “a number of delays on the part of the Burundian Government in allowing the deployment of African Union observers”. Human Rights Watch (HRW) previously warned of “attempts by the authorities to obstruct or restrict their full access”.

‘If the authorities allow you to dig, you’ll find bodies’

APRODH said these mass graves are “guarded by policemen and Imbonerakure (the ruling party’s youth wing) to block all access to those locations”.

“I know that (the regime) cannot accept you to go and identify the mass graves. Now that the international organisations can’t visit Burundi to investigate (the mass graves), it’s getting difficult. When some people are able to have access, then we’ll be able to guide them (to the mass graves),” he said. “If we are with people who are able to visit these places, that we show you a hinge and that (the authorities) allow you to dig, you’ll find people (bodies)”.

He added: “That’s the problem that we have: we are Burundians, we know each other and we know what is happening in the interior of the country, but if the regime blocks all the human rights organisations – even the international organisations – what is left?”

The rights defender, who opposed Nkurunziza’s controversial third mandate in 2015, survived an assassination attempt in August last year. Wounded, Mbonimpa was flown to safety in Belgium, where he received medical treatment, but both his son and son-in-law were assassinated in the following months.

“I’m aware of everything that is happening. I accept to denounce, I accept to speak up even if I was nearly killed,” Mbonimpa said.

The General Secretary of the Forum pour la Conscience et le Développement (FOCODE), one of the nation’s main civil society groups, Janvier Bigirimana said he feared that “most the people that were arrested and are missing could be in those graves”.

FOCODE: Fears ‘more graves scattered all around the country’

Bigirimana, who is also Secretary General of the coalition of lawyers of victims of international crimes committed in Burundi (CAVIB), exclusively told IBTimes UK: “These revelations once more confirm that the situation in Burundi is alarming. The fact that such a high number of mass graves have been identified by the APRODH is a proof that most of the people that are regularly arrested and were unaccounted for are no longer alive.”

While he said it was impossible to evaluate how many people may have been allegedly buried in these graves, Bigirimana warned “that there could be many more scattered all around the country”.

Only with independent investigations can the authorities hold accountable the authors of these crimes, Bigirimana said. “We would therefore need a much more in-depth and independent international judicial inquiry to estimate the number of and identify the victims.”

Although FOCODE carries out its own investigations and was handed the APRODH’s findings, it did not participate in the investigations.

The authorities are yet to comment on the APRODH’s claims.